THE FLAGSHIP OF THE FACILITY 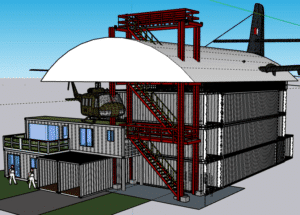 The flagship of the VTF, this multi level training centre includes abseiling facilities and a HUEY helicoptor! 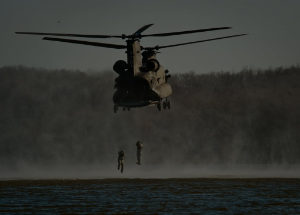 The SMEAC Museum will be entered through a dimmed 20’ container which will provide a portal into a series of similarly blacked out labyrinth of dimly lit 40” containers. 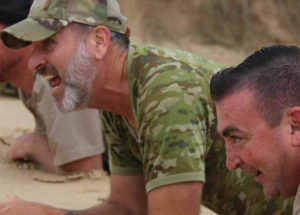 The top floor will consist of a reproduction DHC4 Caribou mock up aircraft designed to replicate a parachute exit tower capable of dispatching a simultaneous stick of four paratroopers along a 200m long flying fox.

Complete with a HUEY helicopter, the Langley MUD, (Multi User Depot), Centre or commonly known as the “MUD” will be the flagship of the Veteran transition Facility, (VTF) at camp X-Ray. It will consist of three levels of 40 foot containers laid out in a hollow square formation with the SMEAC Museum occupying the first 2 levels.

It will have an 18m long x 10m high series of climbing walls with automatic belays on one side and a similar size rappelling, (Abseiling), wall on the other. It will include a toilet block, a cafeteria and a picturesque picnic area on the ground level and a DHC4 Caribou aircraft exit tower, (Flying Fox) sitting on top. The 500m high rope course will exit and enter through gates on the top floor.

This will be a state of the art activity centre with a safety system second to none. Each participant will be fitted with a multipurpose safety harness at ground level that can only be removed by the SMEAC safety staff when the participant has finished for that session. The participant will be attached to the SAFEROLLER CONTINUOUS BELAY SYSTEMS®, a cutting edge system that once connected to the safety line it is impossible to disconnect without the express expert assistance of an instructor. 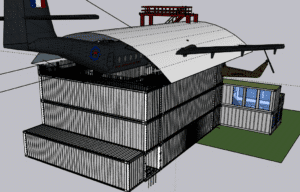 The SMEAC War Museum will be entered through a dimmed 20’ container which will provide a portal into a series of similarly blacked out labyrinth of dimly lit 40” containers. The adventure will move in a clockwise direction with the unrecognisable and unseen fire safety doors located on the left and around 12 ultra realistic displays that can be observed through observation openings, allowing the viewer to see into another world on the right.

It is a hot bright sunny day with two Rats of Tobruk, sitting behind their Vickers Machine Gun in a recently occupied German trench. Empty cartridge cases are piled up beneath the weapon, a result of an unseen battle lapping against a discarded German Afrika Korps helmet and ammunition bandolier. The troops share a smoke and a brew not knowing that their world is being encroached upon by a visitor from the future,

Or a half section of Australian infantry patrolling through a Vietnamese jungle, drenched in mud and sweat, the light struggling to penetrate the canopy. Weapons in hand, faces camouflaged, watching their arcs unaware of the onlookers only several meters ahead.

SMEAC in conjunction with the Australian War Memorial, Movie World and our amazing veteran network make this one of the best displays, covering all theatres of war from an Australian perspective. We will make it look like and feel like you are there because it will be created by those that have.

The second floor will surround a centre quadrangle theatre / auditorium with 5 m high ceilings and a final resting place for our mates and comrades who have fallen. Walls covered in a uniform 10 x 8 framed photographs of people we have lost be it on operations, suicide or training accident. The screen will show a loop of appropriate footage taken by those that were there. This quadrangle will be boxed in by a layout matching the one below only better lit with display cases packed with memorabilia from all three services replacing the dimly lit tunnel below.

HOW YOU CAN HELP

The top floor will consist of a reproduction DHC4 Caribou mock up aircraft designed to replicate a parachute exit tower capable of dispatching a simultaneous stick of four paratroopers along a 200m long flying fox. In addition a series of four 10m rappelling exit towers capable of dispatching multiple groups simultaneously either via a standard wall, a mock up UH1H (Huey) or an S70A Blackhawk helicopter. it will also be the platform in which the crew conducting the 500m high rope course will exit and re enter.

The opposite side will be a series of automatic belay climbing walls up to 10 meters in height and ranging from beginner to extremely advanced. No person will be able to ascend past the fully enclosed second floor without being attached to a fully secured individually removable harness and safety equipment.

HOW YOU CAN HELP

The Langley MUD Centre will be utilised by SMEAC for school camps, Veteran youth programs, Youth Justice camps, corporate training and by weekend adventure warriors along with many others.

The MUD will be SMEAC’s “Key Terrain” placing SMEAC in an enviable position enabling the organisation to compete from an elevated position better allowing SMEAC to Reconnect, Reintegrate, Retrain Veterans for Purposeful and Meaningful Employment. Simply put it’s a Hand Up not a Hand Out with no Veteran or Child being Left Behind.

At any one time it will employ, including the cafeteria, over 30 veterans. This is in addition to SMEAC’s other activities and events, but not including the safety, administrative and maintenance crew. The veterans employed to build, maintain and create the museum nor those cleaning and refurbishing the area.

Help us raise awareness of what SMEAC can provide to Veterans.

Join as a Veteran willing to help or just as a supporter. Your small donation or offer to help will make the difference to get the VTF live.